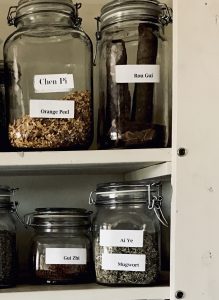 I have been thinking about post-COVID symptoms, and here are some of the possible reasons, according to Traditional Chinese Medicine (TCM).  And some things you can do to help yourself, if you are experiencing these post-illness.

Qi and yin can become deficient after any long and/or difficult illness.  And if the illness has phlegm production, it can follow along the path of Qi and accumulate somewhere else.  That is called sometimes called hidden phlegm.

The following symptoms may be due to Qi deficiency or hidden phlegm or a combination of both: leg swelling, severe fatigue, heart palpitations, muscle aches, joint pain, trouble breathing, headaches, brain fog, or sensation of something stuck in the throat.

Here’s a few dietary changes you can try.  Limit dairy, temporarily, especially milk and ice cream.  Eliminate sugar.  Stop drinking beer;  it has a dampness quality to it.  Heat your vegetables.  Raw food is more challenging when your Qi is deficient.

Dried orange peel tea is my favorite tea for phlegm.  Cinnamon is also a good, mildly warming tea for hidden phlegm and joint pain.  I wouldn’t recommend teas that are colder in nature, such as green tea or peppermint.  They can aggravate weak Qi and phlegm.  I also wouldn’t recommend going directly to strong tonics, such as ginseng, unless and until the phlegm is resolved.  Black Tea can even help resolve phlegm, but it has caffeine.

This is a site of random information but may contain some interesting stuff.